How Do Solar Panels Work and Other FAQs

Learn a bit about how solar panels produce the energy you need for your home.

How Do Solar Panels Work?

While residential solar power becomes more popular with each passing year, many people still don’t understand how solar panels work on a house, how solar panels help the environment, how they work at night, and other basic questions.

As you consider installing solar panels on your Central Ohio home, the team at Lifetime Quality Solar wants to help by answering some of the most commonly asked questions we hear during consultations.

What are Solar Panels and Other FAQs

Below you’ll find the answers to some common questions about solar. These are just basic explanations, but we’re happy to provide more information if you have further questions during your consultation with one of our solar installation professionals.

How Does Solar Energy Work?

Solar energy works when energy from the sun is absorbed by photovoltaic cells in solar panels. An inverter then converts that energy into usable AC energy, which then travels through the electrical panel and can be used to power the devices in your home.

What Are Solar Panels?

Solar panels absorb energy from the sun, which in turn gets converted into AC energy for immediate use in your home or can be stored in solar batteries for later use. There are three types of solar panels: monocrystalline, polycrystalline, and thin-film solar panels, with the first two types being most suitable for home use.

How Do Solar Panels Work on a House?

It takes more than solar panels alone to deliver the energy you need to power your house; you also need an inverter to convert the collected energy into AC power. Solar panels work by converting photons from the sunlight into DC power, which enters the solar inverter and is converted into AC power.

How Do Solar Panels Help the Environment?

Transitioning your home to solar power helps the environment by reducing greenhouse gas emissions and reducing your dependence on fossil fuels. For homeowners who want to shrink their carbon footprint, installing solar power is an excellent option.

How Do Solar Panels Work at Night?

Technically speaking, solar panels do not produce electricity at night, but you can still use solar power at night if you have solar battery banks to store the extra power produced during daylight hours. In some locations, including Ohio, net metering is another option. This is a billing mechanism offered by some power companies that allows customers to use the power generated by their solar system at any time, rather than only during the time it’s being generated.

Learn More About Our Solar Power and Our Highly Reviewed Services

Contact Lifetime Quality Solar today for more information about the many benefits solar power provides. Browse our other helpful resources and then call or fill out our online form to request a free consultation with a Central Ohio solar specialist. 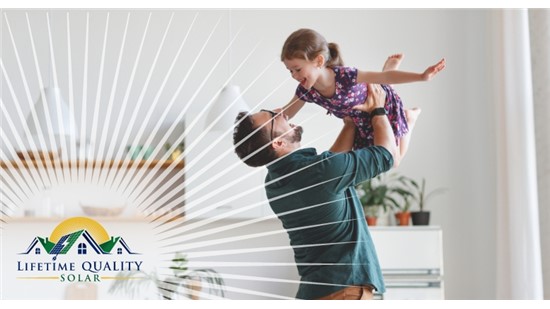 Get a 26% Federal Tax Credit on Solar Installation

The government offers attractive incentives to encourage homeowners and businesses to transition to solar power. One such incentive is the federal solar tax credit.

Get a 26% Federal Tax Credit on Solar Installation

Such a great company and great experience. I would recommend lifetime quality solar to anyone.